“Jings, Crivvens!”, Oor Wullie the musical, opens at Dundee Rep Theatre for the world premiere on 23rd November.  It runs until 5th January before touring Scotland until 14th March 2020. Join Wullie, Boab, Soapy Soutar, Wee Eck, and the rest of the Sunday Post gang, in a brand new musical adventure celebrating their 80th anniversary as Scotland’s most beloved comic strip. 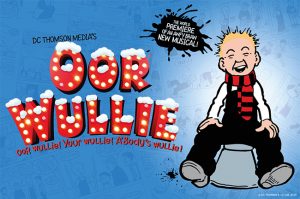 The show was produced in partnership with Selladoor Worldwide and is hotly anticipated by fans across the world!  The musical adventure celebrates Wullie’s 80th anniversary as Scotland’s most beloved comic strip.

Oor Wullie is published in the D.C Thomson newspaper, the Sunday Post.  Created by Thomson editor R. D. Low and drawn by cartoonist Dudley D. Watkins, the strip first appeared on 8 March 1936. Watkins continued to draw Oor Wullie until his death in 1969, after which the Post recycled his work into the 1970s.  New strips were eventually commissioned from Tom Lavery, followed by Peter Davidson and Robert Nixon.  Ken H. Harrison drew the strip from 1989 until 1997, when Davidson resumed duties. Between January 2005 and 2006 story lines were written by broadcaster Tom Morton and subsequently they were written by Dave Donaldson, managing director of Thomson’s comics division.  The current writer is former Dandy editor Morris Heggie.

For a full list of news and events in the Dundee area take a look here: Dundee News and Events

Be the first to comment on "Oor Wullie the Musical"

Internationally bestselling author Peter May was supposed to have called time on his writing career in order to focus on retirement and on his other passion, making music, by now.
Instead, he is back on the promotional juggernaut for his latest novel, A Winter Grave, a thriller set in a not-too-distant independent Scotland reeling from the effects of climate change. Lifestyle – The Courier Dundee …

A three-bedroom detached property in Fife will go under the hammer later this month, with bids starting at £110,000. Lifestyle – The Courier Dundee …

Chris Heather and his wife Melodie started Heather Street Food in lockdown with four wheels and a doughnut-covered dream. Lifestyle – The Courier Dundee …

There’s been plenty happening in Fife this year when it comes to food and drink. Lifestyle – The Courier Dundee …

Want to post on our blog? Submit an article